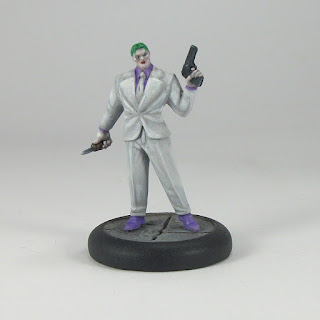 Another BMG character completed, and my first iteration of the Joker - and the weakest of the bunch (so far) in game terms, but probably the simplest to paint, which is why he jumped the queue ahead of my part-done Arkham City Joker!

Not my greatest painting, but he will do for a 'quick and done' paint-job.

For those that don't know, this version of the Joker is from Frank Miller's Dark Knight Returns comic book from the 1980's, set in a time when Batman has been retired for a number of years, and when characters are in their latter years.

This Joker is stripped down in terms of tricksy weapons (no Exploding Teeth or One Shot Gun Trait, an Automatic Gun and Precise Knife instead), but still brings the game manipulating Kaos Agent and Trickster, along with Cruel (a more expensive version of Arrest) at a super-low 70 Reputation. The difference in value to Arkham City Joker's 90 Reputation is essentially a Henchmen, so arguably this one is better geared towards creating a swarm, although he loses out on overall threat. 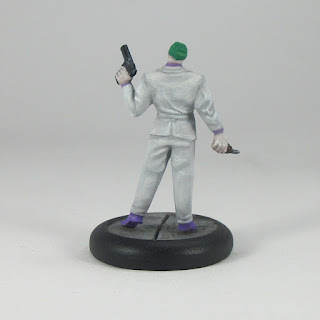 I hope to add a Harley Quinn to the crew soon and finally feel able to field my first Joker crew, but as ever, time and focus will tell on whether I manage that! Aesthetically I like the Batman the Animated Series (BtAS) Harley with this Joker, but her Endurance 4 makes her a liability in-game, so that is not to be unfortunately. That turns me to Arkham City Harley who is a likely candidate for painting before too long.