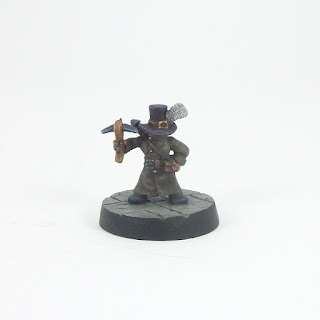 This mini was painted alongside the Zealot Wizard but finished a few days later. I have had this mini for years, sitting in the pile of unpainted stuff. I don't think I had any particular project in mind when I picked him up, I just thought he looked ace.

When I embarked on my 28mm Fantasy Project I dug Van Halfling out of the pile and set to work on him (meanwhile ordering lots of bits and bobs from across the interwebz - it will be an eclectic project in terms of manufacturers!). 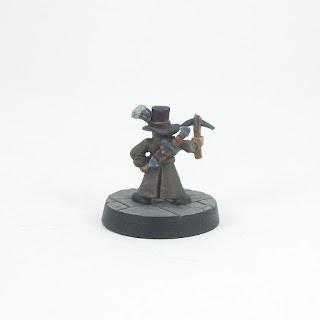 Van Halfling is by Heresy Miniatures and comes with three right arm options including a flaming torch and a scroll. I love the the idea of a Halfling inquisitor/witch-hunter, and that will fit the emerging world populated by the various adventurers of the 28mm Fantasy Project. I imagine that he has been cast out by the organisation he worked for and is now allied with other adventurers as he seeks to redeem himself by hunting the things which lurk in the dark. And witches, no inquisitor can overlook some witch-hunting.
Posted by pulpcitizen at 00:01