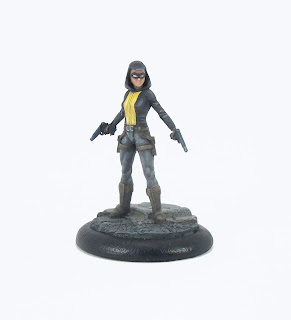 Amid Zomtober outputs, The Cowl adds to my burgeoning development of the Kitbash Games Supers Unlimited range, and even though I love them all, is probably one of my favourites. I hope to launch the range via crowd-funding in January 2019.

The Cowl is the latest in a line of shadowy heroes who have used the power of a mystical cowl in the pursuit of good. The history and experience of each preceding Cowl imprint on the hood, offering guidance to the next wearer until their time finally comes to an end. The current Cowl focuses on street-level super-crime in Louisiana's Rivière Noire, while also serving as  member of the Covenant of Justice. Averse to taking lives unless there is no other option, she primarily relies on special less-than-lethal ammunition for her trusty guns. 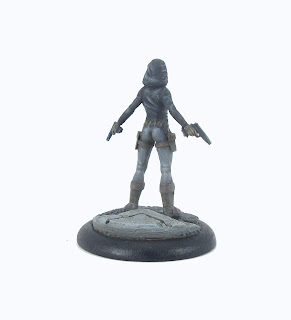 In the run-up to the January launch expect to see more detail about rules for the game and range over on the Kitbash Games blog, including this sneak peek here: https://kitbashgames.blogspot.com/2018/10/supers-unlimited-beta-cards.html
Posted by pulpcitizen at 23:32