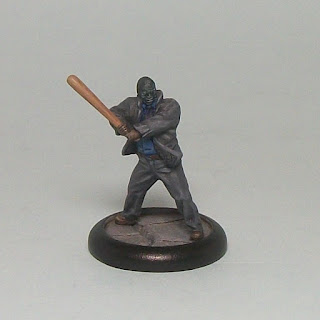 Another model done, which is good, and the crew grows; I still have two more minis to add to it. That said, this was a pretty disappointing casting once again, with a partially-unformed lower hand where it was supposed to grip the bat, and some big lumps of metal (too chunky to be called flash) under the arms. In all, the weakest paint-job of my weekend's three finished minis (although the photograph seems to have washed out some of the highlights unfortunately), but another one done, which was satisfying after April's painting slump.

In game terms, when compared to the first Goon I painted, with identical skills values, identical Personal Trait (Brutal) and near-identical cost, there does not seem much between that model and this one.

Goon (the first one) has Brass Knuckles, dealing 2 Stun with Strength 4+. Goon 2 (this one) has a Baseball Bat, dealing just 1 Stun, but with Handy (re-rolling misses) and Heavy (adding +1 to the Strength value, meaning Damage on a 3+. All very much of a muchness? 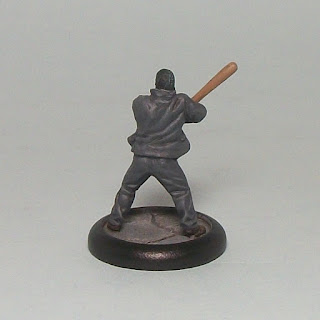 Apply a little maths and it appears that each has a subtly different advantage to the other. Overall Goon (the other one!) is better at taking models down based on basic Damage output, simply due to the superior Stun output. However, Goon 2 (this one!) has an advantage of generally producing more hits to match against the critical die. Goon 2's best role though, is probably in taking out KO minis, since he should achieve more hits against them (thanks to that reroll), and the surplus Stun of the Brass Knuckles is then redundant. Stuff for me to remember when fielding my Black Mask crew!

I can see a tag-team of sorts with the two models: Goon attacking first, and if a model is KO, maybe using Goon 2 to try and convert Stun to Blood. We shall see how it plays out I guess.