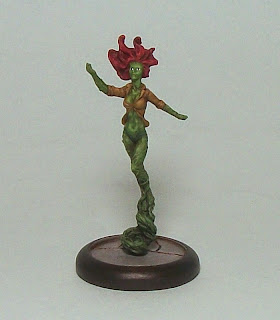 I had originally hoped to get this version of Poison Ivy finished before the March tournament at Titan Games, but time was against me.

The first Poison Ivy I painted is the 'comics' version and this is the Arkham City (video game) version. This mini was started, and sat part-painted for a while. During that time, my painting momentum fell off a cliff, as it does every so often. So, recently resolving to get something 'done', I picked up the brushes and managed to finish this mini off.

I had previously stated that the Poison Ivy crew was unlikely to get another run out by me, but I may reconsider depending on what Henchmen I get painted over the next few weeks, as I have been toying with the following list: 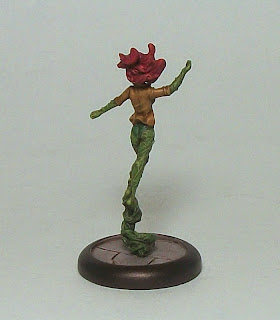 The last iteration of the crew only had 3 models to Manipulate Objectives, so was lacking numbers in that area; this crew has over double that number and has a specialist for Riddles. It lacks the attack-magnet of a big guy, so whether that is a help or a hindrance is uncertain.

The crew above may be one I take to my next tournament, although I am still thinking about Black Mask for that, and have started painting some bits up for that.