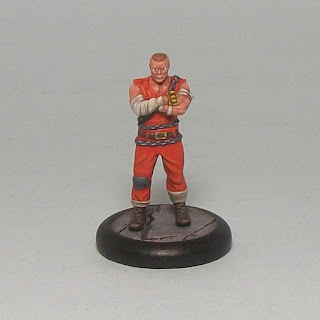 After yesterday's post of Black Mask, another Henchmen down, and one that can be used for either my Poison Ivy crew or my planned Black Mask crew.

Prisoner 04 is probably closest to the first Goon for comparison purposes among the minis I have painted so far. Prisoner 04 costs 2 Reputation more between the two. Both are equipped with Brass Knuckles and have the same Willpower, Movement, Attack, and Defense. Goon has better Strength (more likely to injure targets) and Prisoner 04 has better Endurance, meaning he lasts against Damage a little longer. However  Prisoner 04 benefits from Criminal, meaning *if* he can KO or remove an enemy as Casualty, he increases Willpower by 1 point, which is very useful. He also has Bodyguard, allowing him to take hits for better models.

To benefit from Criminal he needs to get the decisive blow, and more importantly, in trying to do that he is less likely to Damage than the Goon. In all, I think Goon is simpler option, and because of that, the kind of model I will get more in-game value out of I suspect, until I get to grips with the game more. That said they will both get table time, but I already suspect Goon will be slightly more effective for me at first. 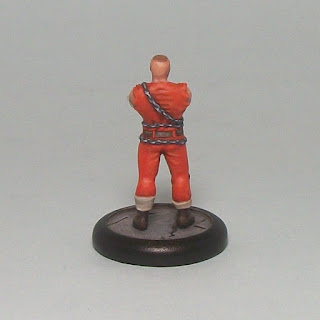 More importantly, I am another step closer to having a playable Black Mask crew.