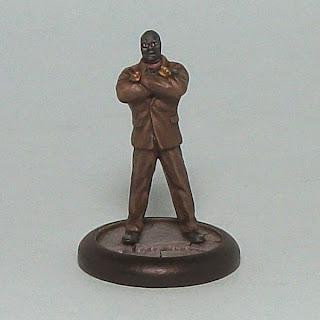 The first mini completed for my Black Mask crew. A very simple paint-job, but that is exactly what I needed after losing a lot of painting momentum recently. And choosing not to bother with pin-stripes was basically to keep the paint-work as simple as possible. For this mini, finishing something for table-top readiness was the most important thing. It isn't my best work, but I have been in a painting slump, so I am glad it is done.

The rest of the Black Mask Henchmen in suits will have simple choices like dark grey, dark blue etc.

The sculpt is far from the most exciting pose I have seen. Also, as with many Knight Models minis I have the metal was softer than I am used to, and the casting was a bit rough in places. Sorry to say, but for me the quality control in production by KM does not match the premium price-point for their products. There are others who have been very satisfied, but for me, their casting is nowhere near the industry best. That said, and in the interests of balance, I know of others who have had no such issues, so maybe I have just been unlucky. 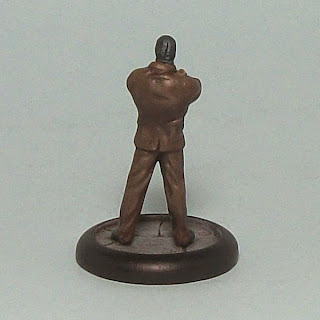 With the pose and the QC issues considered, the reason for me buying and pressing ahead with the mini is that Henchmen are vital to play most viable BMG crew configurations.

Going forward I hope to finish one or two more BMG minis in the next few days. I hope to get in another game in early June, and have a second tournament in late June.