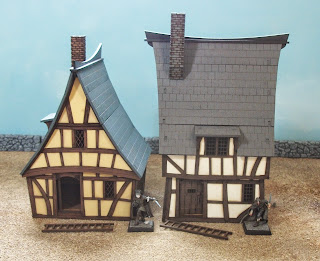 Another two buildings from 4Ground's Fabled Realms range, bringing my total up to 9. I wasn't planning on getting these at this time until I found an Ebay seller offering them at a great price (each was between 22% and 25% off rrp).

These will probably be my last two for a while as I want to add some non-residential buildings going forward, plus some more ruins as they get released (unless I can snag another Backstreet Dwelling at a bargain price!). That means my prime targets are the massive Stoic Arms pub, and the Town Watch Tower which is due for release in June. Time to save up some pocket money - in other words don't expect to see them imminently on the blog! 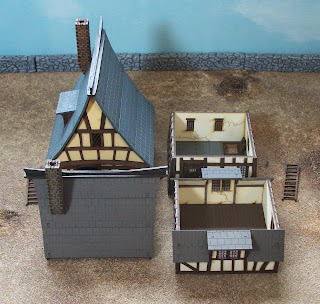 The various Fabled Realms houses effectively come in three types: High Street Houses which are the 'middle class' homes of the city; Dockside Houses represent the grand quarter and most expensive dwellings in the city, owned by traders and wealthy citizens; and Backstreet Dwellings which are the simple dwellings of most citizens.

These are two more High Street Houses, and the larger one is the intact version of a damaged building (click for link) I built a while ago.

The larger building is High Street House 3. It took approximately 3 hours to put together, so a little longer than the undamaged version. Of course it has more cladding to add in, as well as door and chimney etc., so overall more work required.

The other, smaller, building is High Street House 4; this one took approximately two and a quarter hours to build. 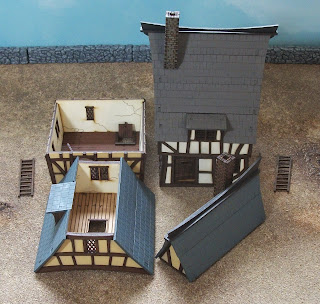 As usual, with both builds I started with the first stage of each sub-assembly before moving to another sub-assembly to allow drying time. I over-painted the tiling on the roofs to cover the scorch marks of the laser cutting process. Obviously that adds more time, but in all still a hell of a lot quicker for me than going the route of a scratch-build.

I have really, really enjoyed putting these things together, and think it will be worth it when they get some gaming time. I wholly recommend this Fabled Realms range to anyone who is thinking about picking any of them up. For me, the price is right for what they offer, and it is nice to have a varied array of buildings that still have a recognisably consistent style.