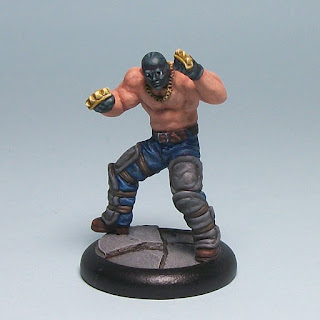 Another Black Mask Henchman done, and this is the first that is intended to refresh the crew. To fit in Mule Goon and Arkham Scarecrow  I will be dropping the Riddler and Goon 2 for the same overall Reputation cost.

With Will 5, Endurance 7, Sturdy and Veteran, Mule Goon should prove pretty durable, although I suspect maybe not as tough as Anatoly since he lacks any kind of armour. His very decent Endurance means he has a 58% chance per Round of recovering from KO; by contrasts an Endurance 5 model has 28% chance, while Endurance 4 has 17% chance. Basically Mule Goon has a very good chance of recovery and thus getting back in the game if not removed as a casualty (see bottom of post for a probability breakdown).

Durability is one thing, and the chance to do 4 Attacks with a 2 Stun weapon is how Mule Goon threatens. Again, better than the 1 Stun per model output from some cheaper models like Goon 2. 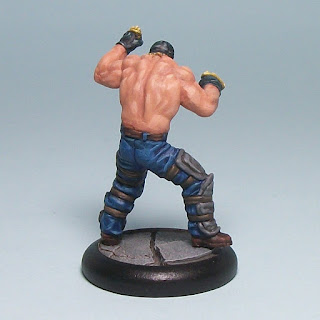 As for the model, as it shares a lower half with Anatoly, again the main hassle was hacking off the lump of metal Knight Models used to make the minis' overhanging feet fit to a 30 mm base. The painting progressed pretty quickly by my standards, which was nice, as it gives me a good start for the month, and I am pretty pleased with how he turned out. I declined trying any tattoo work as I could not imagine a good outcome of me trying that at this time. As usual, the mini is based on a Dragon Forge 'Fraktured' style base as are all my BMG/DC minis from Knight.

The refreshed crew just needs Mesh adding to it, and then it will be as I want it for the time being. I wish I could take Hush, but alas he is limited to only a few crews.