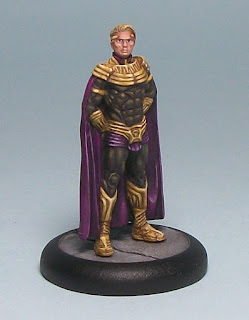 Well I seem to have inadvertently broken my streak of painting one Watchmen character each July! Don't expect the final two imminently though!

I started Ozymandias as I was finishing Nite Owl and did the bulk of the work in stints over two weekends, only finishing him once I had completed work on Mesh and Prisoner 01. That said, start to finish was a little over a week.

I am fairly pleased with how he has turned out, and I think it was a case of right model, right time, while I have some painting momentum - I almost enjoyed painting him, which is to say I don't really enjoy the painting process, but do like having finished models to hand. Despite not finding the painting process ttoo arduous for this mini, and accepting I don't plan to finish Comedian or Silk Spectre any time soon, I do like the idea of playing a Watchmen crew in the future, and technically I have a 225 Reputation crew ready with Ozymandias, Nite Owl and Rorschach, but I feel it is better to play them in full as key stuff like Comedian's ranged threat would be missing. 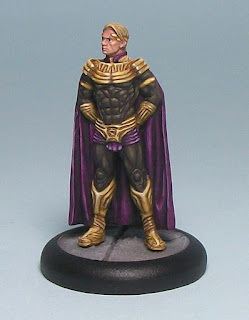 In game terms Ozymandias looks like he is quite a contrast to what I am used to, having very high Defense (I am used to most of my models being easy to hit with Defense 2) coupled with Martial Arts (to counter being outnumbered in close combat) and Acrobat which allows him to Dodge ranged attacks, with a re-roll from Reflexes, giving him something like 89% chance of Dodging successfully if my assumption of probability is correct. I could imagine that if used right he could tie up multiple models by weathering a number of futile attacks, while being potent enough to KO lower-Defense Henchmen without assistance. 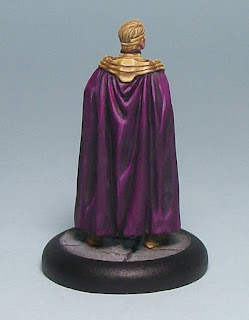 In addition to his combat abilities, Ozymandias offers some game management options with Mastermind (helping with Take the Lead) and Great Strategist giving extra Strategy points. So if and when I do play Watchmen, they will be interesting.

Anyway, all in all I have had a pretty successful painting month so far in July, not least due to finishing 6 BMG minis (a quarter of all my painted BMG minis in fact), so the painting side of the hobby has been pretty positive lately for me - I hope it lasts. :)