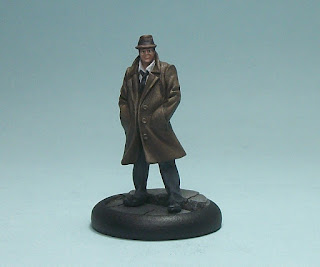 The GCPD Detective was a 'quick and done' addition to January's output (following finishing the Court of Owls Talons William Cobb a few days ago, and Strix last week), picked up and painted as I was having a 'hmm' moment while waiting for some paint to dry on some other minis. It was essentially a bonus mini completed - I am not starting a Law or Batman crew at this time, honest!

I tackled this as it was already prepared, and while looking at it I realised there would not be too many colours needed, and I had a good feeling about how to tackle the brown coat. A case of the right mini at the right time I think, as I await arrival of the remaining Court of Owls minis - as soon as they do turn up I need to get stuck into them. 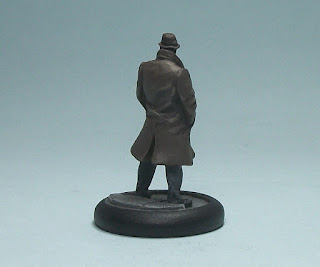 The mini reminds me of a slimmer, less slovenly Harvey Bullock, and I am amazed that in some 200 or so minis released so far for the BMG range, there is still no Bullock model.

As I do not currently play either Law or Batman crews, I can't comment much on his abilities, but he seems a reasonable offer for his Reputation and Funding costs, so I imagine I would use him if I start either.