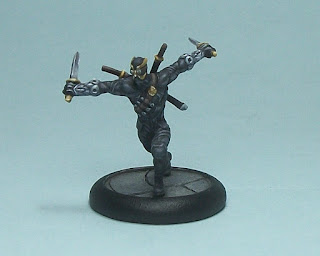 William Cobb follows Strix and is the fifth Court of Owls mini I have painted, and another step closer to having a full 350 Reputation limit crew.

This is my favourite model from the first Court crew box, and was easily the most crisply cast in the box. I found the painting a bit of a struggle with all the costume seams (Knight Models painted their studio version as though it is metal banding, but looking at the source art and colouring it looks more like seams to me from there), coupled with the fact maybe like a lot of hobbyists, sometimes I just find painting harder than at other times. 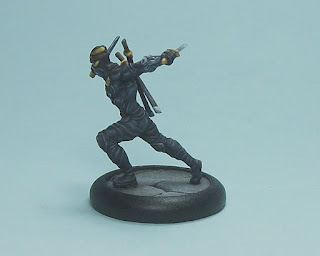 In the comics, Cobb is revealed as the first Talon encountered when Batman finally learns of the Court of Owls' existence, but also the great-grandfather of Dick Grayson.

I recently had a very brief run-out with the Court sans William Cobb, and from that I am looking forward to using him. He lacks the overall threat of Strix, but what he offers is that he is probably the best option in the crew against higher-Defense characters. Elusive, Martial Artist and Stealth Through the Equipment list) will make him more survivable, while Undercover may get him close at deployment to a prime target be it Objective or enemy model. 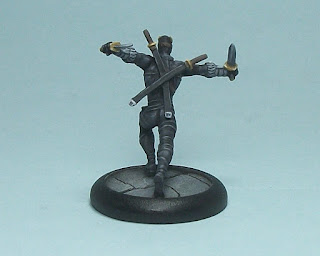 To complete the crew I need to paint at least one more mini, preferably two. I need to add another Talon - Brandon O'Malley - as well as the new Leader option (partly because I feel it has better rules in terms of how I want to play the crew, and mainly because I think it is a better sculpted model). That gives me a few weeks to get things finished for the next Titan Games tournament in Lichfield, which I think is a reasonable target.