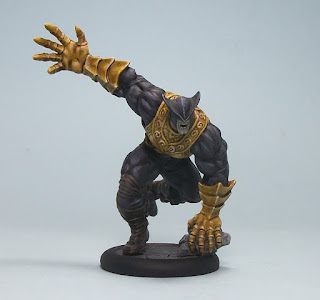 Painting the Gotham Butcher means another BMG mini done, and also reflects that I have settled on what I want to be my next tournament crew (if it all gets painted in time): the Court of Owls.

I have been pleasantly surprised by how much I like the addition of the Court of Owls to the Batman mythos, despite my overall general dislike for the New 52 from DC Comics. Because the majority of my games tend to be at tournaments, the Court of Owls were not pressing to be fully painted up since they did not meet the typical Reputation value of the tournaments that I attend, however this month another crew pack is due for release to meet that limit. Unfortunately the rules as written mean the Court cannot make full use of the other points value allocation (Funding) at this time for crews above 300 Reputation; still I am going to give them a try or two. 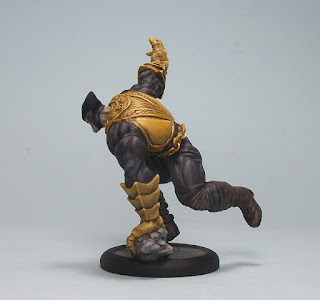 Gotham Butcher is huge. I don't like putting together multi-part metal minis at the best of times, and this one was no exception as it was plagued by three big gaps that required green-stuffing, as well as pitting in quite a few areas. The character in the comics is very big, but as a representation this could have been a little smaller IMHO - even crouched over he is around 55 mm tall to the peaks of his mask, and that is a 40 mm base that he is mounted on. 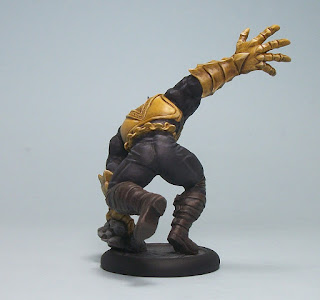 The painting was fairly quick by my standards, despite the large size of the mini. I have really slowed down in terms of output over the past 3 months, so it is pleasing to get something else finished, even if it is far from my best work. Having the looming deadline of a prospective tournament as a motivation should help me get a few minis done in the next few weeks. As things stand technically I need 3 more minis to finish the crew, two of which are in varying stages of progress - I hope to finish at least two more Court minis this month. However I would like to use the new Leader option instead, and I am weighing up not using Strix who is nearly finished in favour of two more Talons. In all the planned crew will be 6 or 7 minis in total.

Gotham Butcher is possibly the cheapest Large Free Agent going right now, and brings some real hitting power with Claws, Brutal and decent Strength. Due to all the possible points combinations, he has to be included in a 350 crew unless I want to leave myself many points short. I think it will take a little getting used to to maximise his impact on the table.