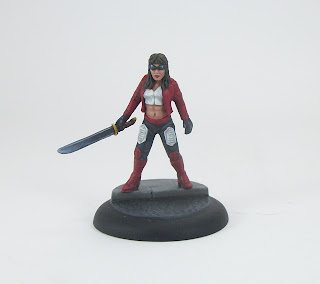 Shadowblade is the final member of SHOC Force (for now!). Like the rest of the Team the mini is from the Nexus Miniatures range of models. The range was perfect for me in creating a Team visual across a group of minis.

Shadowblade is an Unhuman like her colleagues; in her case her powers allow her to teleport short distances, and give her enhanced stealth capabilities which she allies to formidable combat prowess. 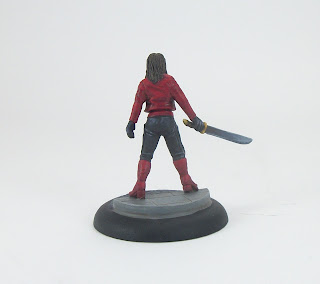 A former assassin for hire, Shadowblade is now trying to build a new life and atone for her past, while supporting the SHOC Force cause and Dr. Omega's Unhuman Manifesto.

I followed the basic template of colours for SHOC Force with Shadowblade, although her costume is the most varied of the bunch. It has been twenty eight months since I first painted Oculus and Razorclaw for SHOC Force, so this has been a pretty long-gestating project. It also means the first finished faction for my 'Super Earth' project - basically the minis I will be using to play-test Supers Unlimited. 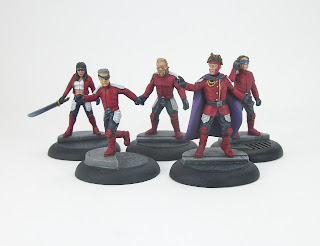 More hopefully, I seem to have regained some painting momentum which I hope lasts for a while and gets me back on track with my output goals.
Posted by pulpcitizen at 00:01