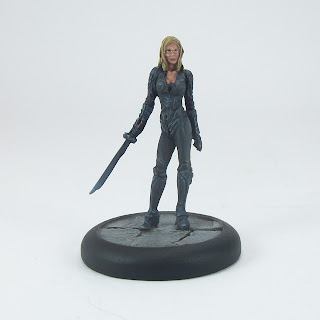 This Arkham City version of Talia was started at the same time as the comics version, and both were set aside together. It is one of the older sculpts in the range and wasn't the greatest cast, with some of the detail shown on the 'studio' picture that was simply not visible on the copy I had. Therefore I am happy with the mini being 'done' more than what I have achieved with it - I did a better job on the comics version Talia than this one; for example the highlighting on the face is a bit sharp to my eye in the picture.

The hair colour I chose is pretty atypical for Talia in comics and movies, but looking at screenshots of Arkham City it looks like she had a kind of 'dark blonde' colour so that is what I opted for, even though the studio paint-job has her a a red-head. It also helps differentiate her from comics Talia. 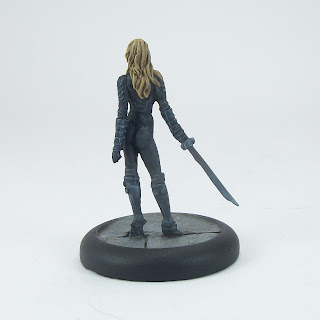 In rules terms, I prefer this Talia to the comics alternative. Both are Sidekicks, but this one is simply a better combatant in my view, and as there is an alternative tournament card set of rules for her, that one may be better again as the cheapest option able to cover ranged and close combat offering greater flexibility. If I did field a League of Shadows crew I would be more tempted with the tournament card profile, but time will tell if I ever get around to playing that crew.

In all it has been a productive couple of weeks for me with my BMG painting, and I have even made a start on yet another mini I hope to complete soon - Robin (Damian Wayne), probably inspired by painting up two version of his mum!