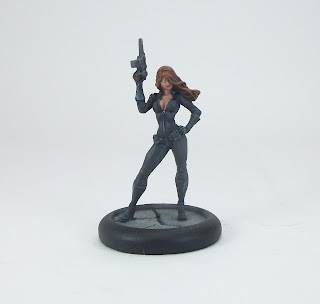 Talia is my 62nd painted BMG character, and oddly enough, only the first Sidekick I have painted in the range. For readers unfamiliar with the game there are several main character ranks: Leader, Sidekick, Free Agent and Henchman. Out of 270 character models (and rising....) almost 40 are Sidekicks, so in other words, I am long overdue actually painting one...

This is one of currently two versions of Talia, both of which I started a while back and both were subsequently sidelined to finish other stuff prior to my recent painting slump. Regaining BMG momentum helped get me on track to finish this mini and do a little more work on the Arkham City version of Talia. I have seen Talia depicted with an array of hair colours over the years, so decided on painting her as something of a red-head. Probably a lighter hair colour than she has been depicted with, but I am happy with the contrast to all the dark parts of her costume. 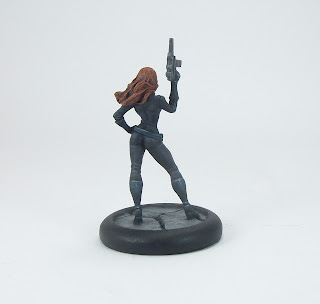 I don't have painted League of Shadows or LexCorp crews yet (Talia is the only dedicated LexCorp mini released so far), so I don't expect to use this Talia anytime soon, or indeed ever. However, even if I was using either crew, she does not wow me with her character design in game terms, so she may be destined to forever remain in the cabinet. Still, the most important bit is another mini done, and my first Sidekick to boot!