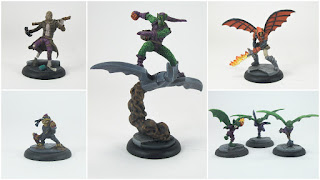 The first of my 2017 Painting Summaries shows I had a bad couple of months on the hobby front. 'Real life' stuff reared its head and impacted my motivation to paint in particular. So, following a fairly good January, I then didn't paint anything for pretty much two months, and have only just started to get back on track.

I painted Feartigo and Grimm Lee Chan from Pulp City (click for link to my blog for Pulp City), and Green Goblin, Goblin Knight and the Goblin Minions from the now-defunct Spider-man Miniatures Game.

On a more positive note, I am hoping the fallow period is behind me as in the past 3 weeks or so I have painted 5 minis (some still to be shown). In addition, while I felt unmotivated to paint during those eight weeks, I did find enough impetus to pull together a rules draft for a skirmish minis game, and work on stuff for another two games while I was at it.