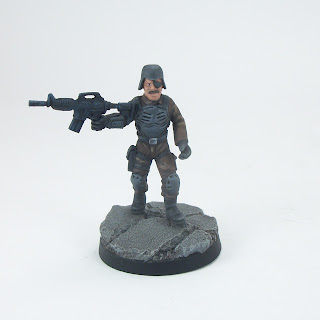 Another G.I. Joe Project mini done! Unfortunately Major Bludd had been languishing in the queue of part-painted minis for far too long.

Major Bludd is an ex Australian SAS member turned mercenary who joined the Cobra Command payroll. He frequently serves a s a field leader and is not averse to working against other members of Cobra at the behest of Cobra Commander. Unlike many Cobra operatives, Bludd isn't a true believer, instead his prime motivation is simply money. 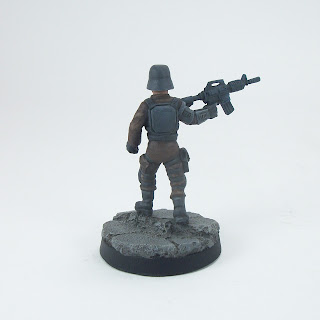 I admit I struggled with the limited palette of the character, especially highlighting the uniform. I changed the gun the mini came with for another that felt more appropriate. I tried to bend his gun arm forwards, but not enough; in hindsight I should have re-positioned the head to be looking along the gun. Despite the painting, the main thing is that the mini is finished and adds to my slowly growing forces.

I have already started work on a few others, and have Gung Ho to finish who has been part-painted for as long as Major Bludd. In addition, work continues on Squad Wars to eventually get some games in with the minis.