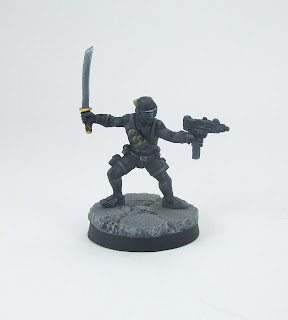 Snake Eyes is my fourth painted G.I. Joe Project mini, and probably one of the coolest characters in the Joe-verse.

For those unfamiliar with the character, Snake Eyes is basically a silent ninja-uber-commando working as part of the  G.I. Joe team, with strong connections to other key characters such as Scarlett, Stalker and Storm Shadow. This version is based on his second iteration as an action figure. 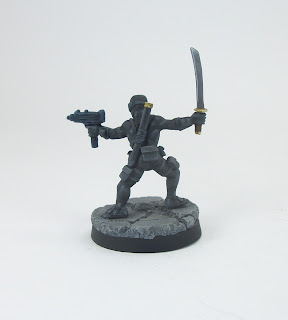 I started painting the mini late last year and ended up getting side-tracked by other projects. He was started sometime after Major Bludd, but I only picked up work on him again when I started tackling some recent G.I. Joe Project minis that kick-started with the painting of Destro. I'd like to get a couple more done before the end of the month if I can, and have started work on Hawk, Cover Girl, and Stalker, and I need to finally finish off Gung Ho. Three out of those four with Snake Eyes should give me a playable starting force for Squad Wars.