The Eye of the Tiger!

Well, that escalated quickly! No sooner than I set course with my SMG Project, than I learn of something called Forgotten Heroes which perfectly dove-tails with my own project  - the only requirement being to produce something in June and following the rules as set out:

I think #1 is a slight fudge for me as my character never had a mini made while Marvel stuff licensed by Knight Models, and only had a single Heroclix incarnation.
#2 is a bit of a fudge as Knight call their 'scale' 35mm (I know it is not a scale per se....).
#3 is do-able, and for #4 read on.... 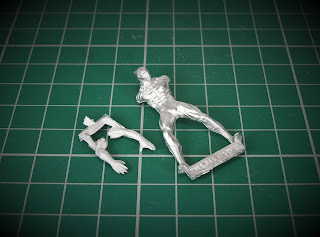 My character (as can be seen in the top picture) is White Tiger, a character created in the 70's amid the martial arts craze that swept American popular culture. White Tiger (Hector Ayala) was Marvel's first Hispanic hero, and really was only a sporadically-seen character for the next twenty-five plus years. Nowadays his mantle has been taken on by other characters (his sister and niece), and White Tiger is probably an apt Forgotten Hero.

My plan is to use the Black Panther mini as the basis for the character. His gloves and boots will get a little filling with Milliput. His pointy panther ears will be removed and filed down. His panther-teeth necklace will be trimmed back and an amulet made out of green stuff. And if I feel really confident, I may (emphasis on *may*) try to do his boot/leg wraps.