A long while since my last post - far from intentional, but simply other hobby stuff (mainly Pulp City - including a little bit of writing) has occupied my time. However, in the past few days I have been busy building some minis for eventual painting so I thought I'd show a few WiP's, which i don't often do on my other blog. I thought that I would also explain a little bit of why this little project is quite significant to me. 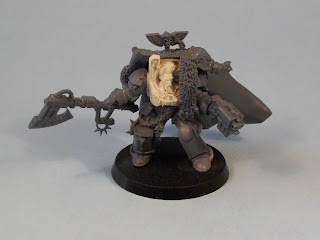 My dalliance with the 'Games Workshop hobby' as they (GW) have been wont to call it, started in the late 80's. Warhammer 40,000 grabbed my attention as soon as it came out. In good time I spent a few years working for GW in a store and eventually my first phase of GW hobbying ended. Several years later I became intrigued by the revamped Tyranids and accompanying Codex. I finally finished painting an army. With my best mate/main gaming buddy Rob, I started to attend the GW Grand Tournament annually - doing so helped me paint another 3 armies. 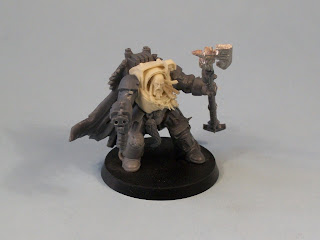 One of those was 13th Company, lost members of the Space Wolves, started around 2004 and used for that year's Grand Tournament (unsuccessfully - laughs and beers were the usual order of things for Rob and me at GT!). Over the next few years Rob and I started looking at other minis, games, genres and manufacturers, and so my GW stuff has been quietly stuck in the cabinet or cases. Withe the recent Space Wolf revamp I had picked up some Grey Hunters and Terminators. They sat unused for ages until recently I have been sorting ahead of house move. Therefore I made an effort to get down to some serious kit-bashing and look to get some more 13th Company painted. Hopefully the next few months will show development on these, as well as me doing some tidying on the original army to make it look nicer.
Posted by pulpcitizen at 06:26