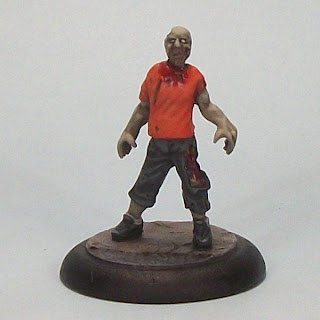 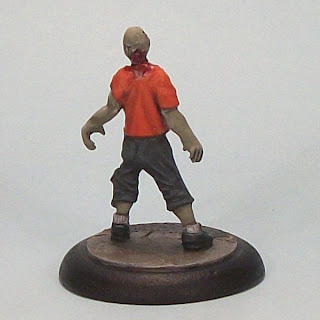 The mini is from Hasslefree, but not sculpted by Kev White as far as I know - not sure who the sculptor is. I prefer the Studio Minis ones generally speaking, but if I ever paint all my Zeds, at least they should be varied!
Posted by pulpcitizen at 14:29 6 comments: 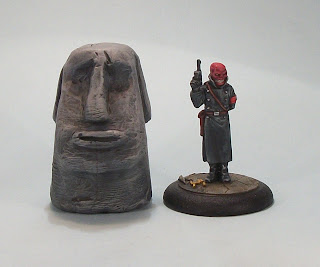 This was kindly crafted by TWT (his blog is here), who bundled it with some other stuff for me.

I painted it to approximately match the big heads I got from my aquarium shop. Basically greys dry-brushed with a mix of washes in brown, green and grey.

I can see this (and maybe others, hint, hint!) as a warning totem in a remote jungle, perhaps on Resurrection Island.

The mini was from What The? and is used for scale (with 30mm base).

Thanks a lot TWT - very much appreciated!
Posted by pulpcitizen at 06:07 2 comments:

Email ThisBlogThis!Share to TwitterShare to FacebookShare to Pinterest
Labels: Terrain

I recently bought some kits from Plat Craft, a Spanish company that is producing gaming-terrain kits using foamed PVC (makes a change from MDF!).

These are the first things I bought and I thought I would briefly outline my initial impressions, with more insights when they are eventually built.

The kits I picked up were: (2 x) Torii Gate; Fukei Bridge 2; Sci-fi big container. It was the Torii gate that led me to Plast Craft as a manufacturer.

Downsides:
So what I would suggest is judicious consideration of the products available, and asking yourself that if a lot of extra work is required to add texture (for example the need to create the effect of planking on the Fukei Bridge), then how cost-effective is it really since other options may be as cheap or cheaper (e.g. scratch build), with the time factor being a big issue in decision-making.

Before building some of these, I would suggest that some represent excellent value for money, but anything that appears to have a lot of texture would probably necessitate a lot of work so buy with caution.
Posted by pulpcitizen at 06:38 1 comment: 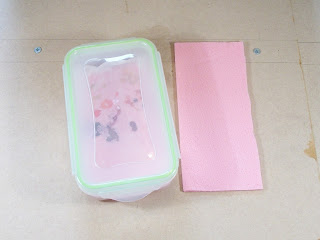 Not my idea, but I wish I had done this so much sooner.

I have been wanting to make a wet palette for a while but had two suspicions:

1. That the hype about retaining paint fluidity would not be met.
2. It would be a hassle to use.


Well I was wrong, very wrong, and as I say, I wish I had made this sooner.

Already after a few days I have noticed that acrylic paints used from the wet palette retain fluidity longer, allowing for smoother application, and more leeway in time to use up the decanted paint.

In the second picture, the photograph shows the wet palette as used this morning and four days ago. The yellow and orange that still look glossy are from four days ago; they are not usable now, but retained some fluidity for around 24 hours.

The red-brown flesh wash (just above the two browns at bottom left of the paints area) and the two browns below it are all two hours old at the time of the picture, and all still have fluidity.

The wet palette cost me £2.99 in dedicated materials, but all of them could be found around the typical house. I used half a cellulose sponge which was made wet, wrung out, made wet again and wrung out to retain dampness. Then I put a strip of grease-proof paper over that (wrapping the ends under the sponge) and the container is one of those lockable lid types.

Simple, and that £2.99 included 2 containers, 6 sponges and a few metres of grease-proof paper. This should last a while.
Posted by pulpcitizen at 06:03 3 comments:

Email ThisBlogThis!Share to TwitterShare to FacebookShare to Pinterest
Labels: Hobby 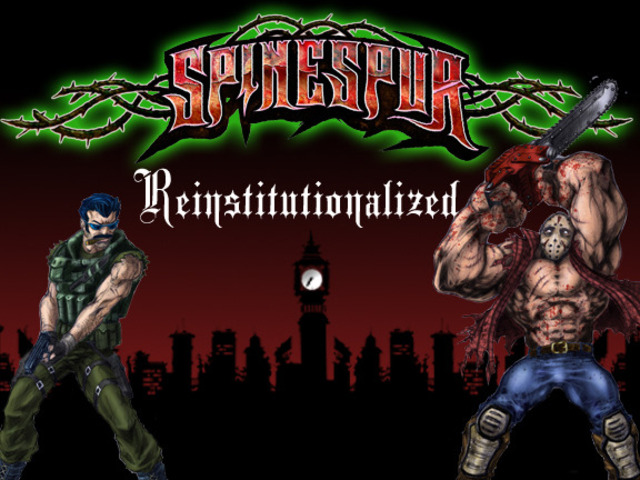 I am sure none of us has missed the surge in crowd-funded new minis games and lines in the past year or two, and it looks to me that even if the approach to such campaigns will see some change, it is here to stay as a business model.

However, crowd-funding is no guarantee of success and some campaigns have failed for whatever reasons. That said, there is a campaign I want to highlight that is close to funding, and I would love to see it make its goals and more.

Spinespur is a game I have had my eye on for a few years. It is pitched as a game of survival horror, set in a world populated by very dark things. The strap-line is:


The game is honest about its subject matter and that means I am fine with the content as advertised, but just trying to give fair warning that concepts may not be for the squeamish or for those that do not like to mix those kinds of concepts into their gaming.

So if that sounds of interest, maybe give this Kickstarter a look.

Posted by pulpcitizen at 23:39 No comments: