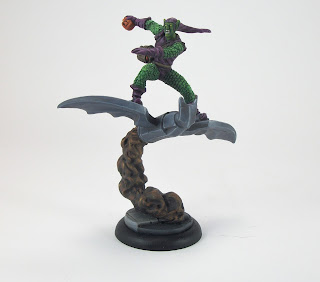 Another SMG mini painted, my first non-Henchman, and thankfully this one went from contemplation to completion pretty quickly! Even better, it is my sixth mini of the month (along with a couple of Pulp City minis).

The reason for the sudden motivation to paint Green Goblin was to play a larger Rep-value game using the Goblin Cult against a Suicide Squad crew played by Simon as soon as possible. With Green Goblin and the Goblin Minions done, I now just need to paint Goblin Knight. It should be a weird and very much asymmetrical game, so will hopefully be a lot of fun. 400 Rep will allow Simon more freedom to pick some 'big gun' characters, and it looks like some big hitters will be on show, not least Deathstroke, Green Goblin and Goblin Knight. 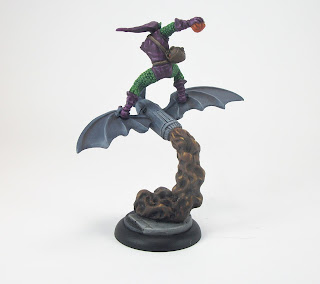 In game terms Green Goblin clocks in at 200 Rep, way beyond any BMG character (the current highest Rep character is 150 for Arkham Knight and Batpod Batman(s). Whether he is worth it will remain to be seen! What you get for that 200 Rep is a lot of Endurance (10 points), a lot of Traits, along with Strength 2+, and enough ammo for 10 shots during a game (he will never actually be able to use all his ammo in fact)! Most importantly, like all of the (admittedly not very many) Goblin Cult characters, Green Goblin has Flight, which is something which will take some getting to grips with I think.

I do wish they had added a couple more options per SMG faction (Elektra could have been obvious and easy to do with Affinity: Daredevil, and some thing for Venom and Doctor Octopus since all three had minis casts up with rules done for two of them at least), but it looks like that ship has sailed unfortunately.