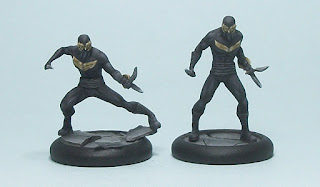 Finishing James and Nathaniel O'Malley means the last two Court of Owls minis done, meaning I have painted all of the minis made available for the crew so far. They were started at the same time as Brandon O'Malley and set aside when I wanted to focus on finishing that model. I kind of rushed them towards the end just make sure I keep 'getting stuff done', but the most important thing for me is that they are finished.

Both appeared along with Brandon in the Talon series; Brandon is Nathaniel's father, and James is Brandon's sire. In the story, Nathaniel is revealed to have ensured he is the last O'Malley to serve the Court of Owls, and is shown as a disappointment to his father and especially his grandfather. 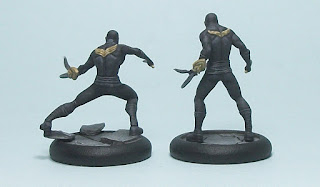 In game terms James and Nathaniel O'Malley are the weakest Talons in the Court of Owls game (so far), with low Attack compared to the others and limited Willpower and Endurance. Consequently they are the two cheapest models available to the crew in terms of Reputation. They don't offer much threat, so the niche for each is likley to be Bodyguard (James; allowing the weak Leader more freedom to step in and challenge for Objectives) and Objective-grabber (Nathaniel),

All things considered about these two additions, I am giving serious thought about using them instead of the Butcher in the upcoming tournament simply as I don't think the Butcher offers very much for hist cost compared to the smaller Talons. It would mean taking a Reputation hit in regards to what is allowed, but is something I am thinking about.