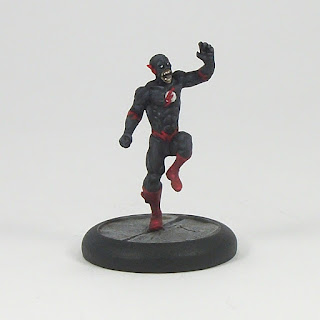 Black Flash is the 46th BMG mini I have painted, and while not hard to complete by any stretch, it is far from a great mini (more on why later).

In the comics, I gather Black Flash is an avatar of death for those who access the Speed Force. I have not been a regular Flash reader since the early 80's, so while I am aware of the character, I am not that familiar with it. In BMG games Black Flash is essentially an effect token: he is not a starting member of your crew, but a representation of 'something bad' happening a Speedster fails a Paradox roll and then rolls 'double '6 on 2d6. Suffice it to say that probability suggests he won't likley crop up that often.

The mini was free as part of 'The Flash and The Arrow' expansion book pre-order. As an exclusive incentive, I am sorry to say I think he is a pretty odd choice as designed in game terms - something to paint up on the off-chance it very occasionally shows up. A better option may have been an alt-costume Arrow/Green Arrow or Flash mini that can be used directly and still ties into the book theme. 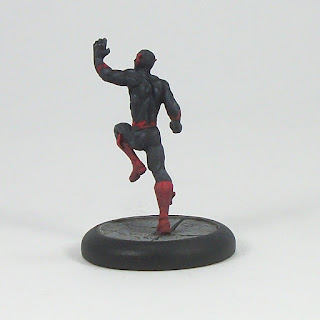 While I am not planning to paint up any Speedsters any time soon, this mini just looked like a quick win in maintaining painting momentum. Not sure what I will paint next for BMG as I have already achieved my target for year, plus a few extra. That said, I would like to finish the Joker crew, the Watchmen crew and maybe get a Team together.

The casting wasn't great, once again. Some recent Knight Models stuff I have found to be nice and crisp, of much higher quality than stuff I had assembled previously. This felt to me like them back to some of their worst casting. The cast itself had a roughness in terms of lumps of flash, but also that weirdly paint would not flow into some micro-pits. As I painted, I kept seeing the glint of metal that paint had not adhered to properly. That said, it wasn't a difficult paint-job once I had blocked in the reds, although some of the definition for the red lightning stroke banding was lacking in places. I have seen that on other BMG minis where it seems the sculptor has simply not bothered with continuing some aspect of detailing (Nite Owl was a previous example, and having assembled but not yet painted comics Black Canary, she is another).

BMG Painting Summary
BMG characters owned: 210 (added: nothing new, but some stuff is due imminently)
Percentage of owned characters painted: 21.9% (46 models)
Posted by pulpcitizen at 02:28