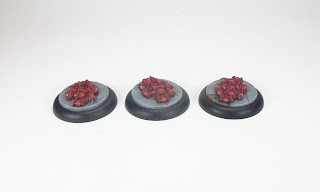 These Spider Robots are my first painted minis for the Spider-man Miniatures Game (SMG) from Knight Models, companion game to BMG (albeit with many caveats). Theoretically SMG and BMG are compatible, but time will tell (as will those caveats I mentioned).

These are not the most interesting of minis, but I set out to get something painted very quickly and these fit the bill! I tackled them as a 'speed painting' exercise which is something antithetical to my usual plodding approach, so that too was satisfying. Either way, I have started on yet another range (albeit one limited to 15 minis at present).

It will be a while before I get an SMG crew together, and it may require house-ruling allowable inclusions due to the dearth of options (especially for the Goblin Cult which I want to play first); right now, assuming 500 Rep increments, Goblin Cult could be played at 200, 250, 350 or 400 Rep, but not 300, and at 350 Rep (typical for BMG tournaments I have been to) the crew has only two models. Right now with no new releases in 11 months SMG seems dead in the water, but they have updated the rules document for it recently so who knows if there will be more SMG models (as opposed to ports from MUMG)? Well Knight Models do, but of course they are not saying either way.