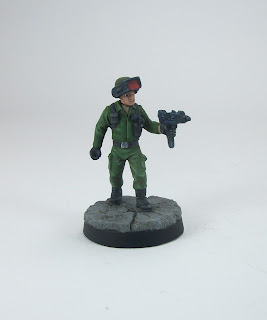 Steeler is a bit of a touch-stone for me, so I am very happy to add him to the G.I. Joe ranks. Back in 1983, my 10-year self was fortunate enough to receive the Z Force Battle Tank and Steeler as a Christmas present, and I loved it. Motorised vehicle that could go forward, backwards in different directions? What was there not to love! That Action Force (Z Force was one of the four arms of Action Force in the canon) tank was a repaint of the original G.I. Joe set of the MOBAT and Steeler. The character was adapted to the Euro-centric Action Force and the colour scheme changed. 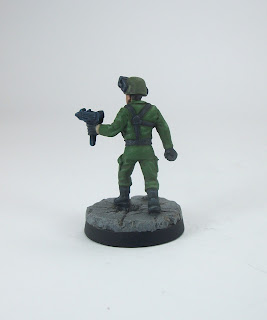 I decided to use the G.I. Joe version colour scheme as my primary influence, recalling a kind of bright olive green for his fatigues on my toy version so working that in instead of the standard green I have been using. Then there was the case of differentiating three different types of 'black' and ultimately it was a fairly straightforward paint-job.

In the Marvel US G.I. Joe comics Steeler is a character who has some key moments in earlier issues then is featured sparingly afterwards. But he has a tank to command, and that is the key thing!

I hope I can carry some of the momentum of the past couple of months into August and progress further into my G.I. Joe Project.