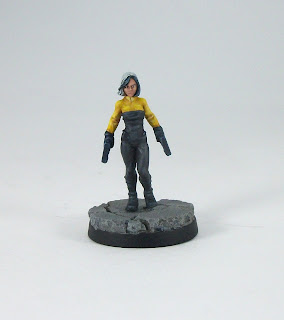 Helix is the latest addition to my G.I. Joe forces, and one of the newer characters added to the canon. I first encountered her in the pages of the IDW comics and was immediately impressed with how she was pitched to readers. Apparently the character was developed for a video game which tied into the Rise of Cobra film, but I haven't played that.

Helix possesses an unusual capability called Total Organic Battlefield Awareness, essentially the capacity to perform complex calculations very rapidly, applying those calculations to anticipate what allies and enemies will do in battle. In the comics, the business-like Helix quickly forms a comradeship with the uber-cool Snake Eyes. There is a very cool sequence in the comics when the two of them take on a remote Cobra garrison and unleash hell on their enemy. 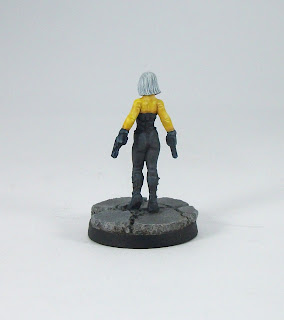 In sourcing the model I encountered a happy accident. Brummie and I have been looking up lots of options for G.I. Joe Project characters, yet while searching for another model which I thought I had unpainted in my collection, I stumbled across this Dionne from Hasslefree Miniatures. The hair and pose were an obvious perfect fit for what I wanted for Helix. I considered adding a webbing belt but opted against it as my green-stuff skills are simply not up to that kind of thing, so instead I concentrated on trying to convey an approximation of her colour scheme. 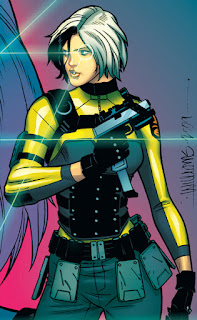 Naturally Helix will make her way into Squad Wars games where she will be a bad-ass on a par with the best of the best like Snake Eyes and Storm Shadow.