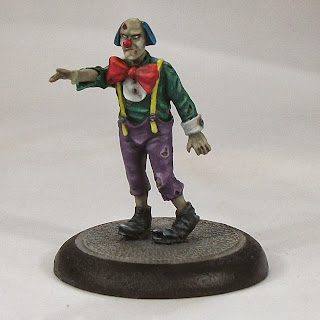 After the lead in of the Anima Tactics mini earlier, here is my intended entry for week 3 - another Zombie Clown.

This one is also by Tengu, and is one of a pair that have separate heads and arms to add variety. This is my 24th Zombie in total, and also the 49th mini I have painted this year. The Zombie horde (well horde is being generous, but what else can it be called?) started a couple of years back, and has so far only really featured in games of Pulp City, but I have been working up some ideas for a Zombie rule-set, so Zomtober has proven a productive period for me in more ways than one.

Aside from Zomtober, I began the year with the intention of painting at least 50 models after the paltry 24 completed by me in 2012. well I have now doubled 2012's total, and I am very close to achieving my my target with a couple of months to go. I am a slow painter who loses motivation quite easily, so I am pretty chuffed with my output so far. If I could hit 55-60 minis painted in 2013, that would be very cool. Assuming I hit my original goal, I may stretch the target in blocks of 5 and see how I progress. 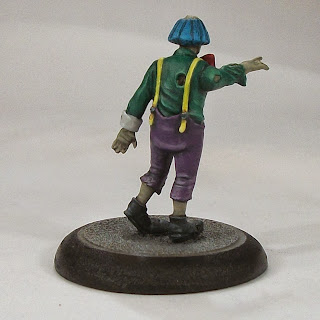 I am pretty confident that barring disaster I will have a fourth and maybe fifth Zomtober mini completed by next Sunday. In addition, Rob and I have one of our annual battle reports lined up for the end of the week which will need to be turned around within four days...