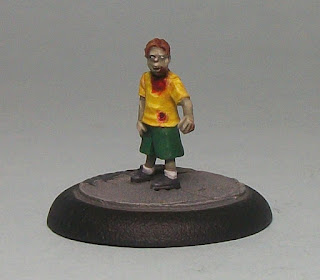 Just one mini for this week, yet a theme for me for Zomtober 2015 is already emerging - this year looks like it will be Zombie kids! After painting last week's primary Zombie entry I dug out a few more Zombie child minis and settled on that as my focus.

The mini was fairly simple to paint although lacking obvious major injuries leading to Zombification, so I tried to paint his face as though that had been the main point of attack. Overall a pretty simple paint-job, although the yellow was a little bit of a struggle. 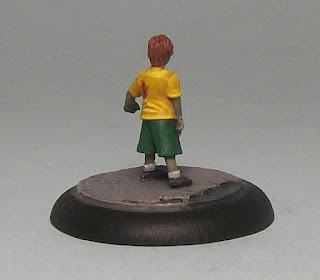 Although I have only painted two minis so far for my regular-Zombies horde, this is my fifth completed mini of the month with the other related stuff I have finished, and I hope to finish the month with a tally of between seven and ten painted minis in total, maybe slightly more if motivation permits. My best total in recent years has been ten minis in 2013, so if I match that I would be very happy. So far this month I have completed Xiao Loong for BMG, and two Tooth & Sword Shambling Zombies. I have also made some nice progress on a mini called Papa Zombie for Pulp City, so Zomtober impetus has certainly carried over!
Posted by pulpcitizen at 10:32