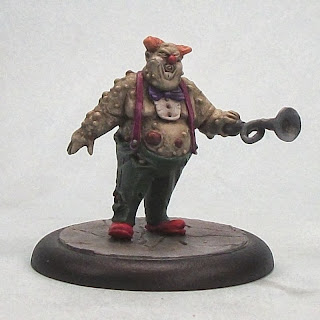 Lots of the Zomtober participants have posted their first minis, so it looks like Zomtober 2013 is off to a flying start. There is some great stuff being posted, and it is cool that some who have been struggling to 'get stuff done' are using Zomtober as a spur to tackle some minis - which is a key part of the Zomtober philosophy. I heartily recommend chasing down the stuff people have been posting,m and the blog roll to the right is a good indicator of their progress.

This year I am trying to through some clown Zombies (as well as finishing off another triad), because as scary as the walking dead may be, undead clowns are scarier still, surely!

This one is from Tengu Models, and another addition to my range of Big/Boss Zombies; the other two Clown Zombies are more 'normal' size, also from Tengu. I have just been over to the Tengu site, and I will have to pick up some more from them soon as they have some great stuff. I find they scale nicely with the Studio and Hasslefree Zeds. The base is Fenris as is usual for my Zeds. 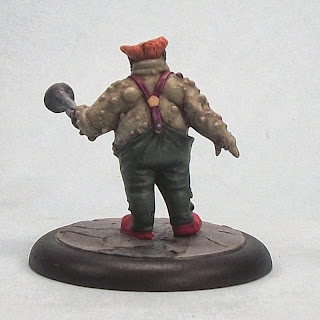 So that is Week 1 done for me, and I have been doing bits of work on the other target models.
Posted by pulpcitizen at 09:07