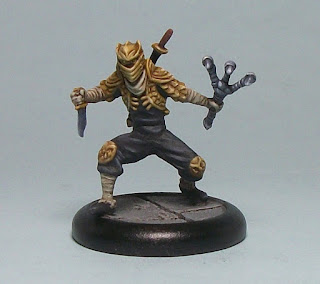 Now this was a pleasant bonus for me from Week 1 of Zomtober - starting painting Xiao Loong and finishing the mini within a couple of days without impeding my planned Zomtober painting!

I have mentally set myself the challenge of painting tangentially related minis for 3 games (Pulp City, BMG and Anima Tactics) in addition to my core Zomtober painting. For BMG this has meant the Court of Owls Talons. Talons are assassin agents of the Court, and there is only ever one active at a time. In the first story-lines, many 'retired' Talons are brought back to life. They are incredibly resistant to physical trauma, have weird voices, and have risen from the dead - close enough to Zombies in some ways to count as a tangential inspiration for me! 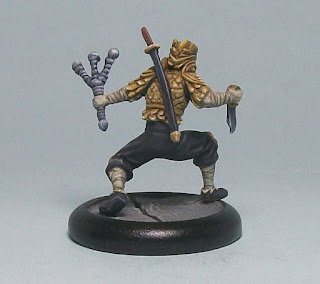 Xiao Loong appears only briefly and is depicted as a somewhat tragic figure, ultimately seeking freedom from his servitude to the Court. This appears to be granted in final terms by Red Hood (Jason Todd), but whether Red Hood kills Xiao Loong is unclear as this happens is unclear as it takes place off-panel so is alluded to rather than shown.

In game terms, the Court is really limited by its current available Leader (Benjamin Orchard), to including only Court models, meaning a total Reputation limiting games to 300 Rep. 3 out of the current 4 Talons are Henchmen, although ability-wise they are equivalent to less-powerful Free Agents in capability, while giving up fewer VP's, and having better all around Skills and Traits than most higher-cost Henchmen. Arguably they are on par or better than Nite Owl and possibly Silk Spectre from Watchmen. Whether that proves the case on the table is another matter. Until I get more of the Court of Owls painted, not one I will be able to answer!