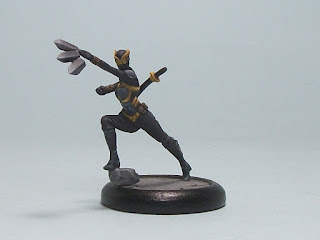 My Court of Owls crew grows, and Strix is the fourth addition to it. This one has taken a while to finish, and really stalled soon after I started it, which was not long after Xiao Loong, so October or November most likely. My renewed enthusiasm for the Court for an upcoming tournament was enough to re-focus me after painting the Gotham Butcher last week. It also means I am well into this year's BMG target. 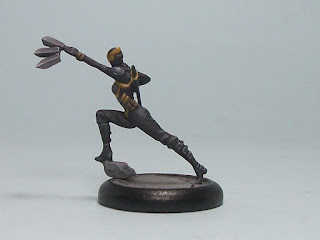 I haven't precisely followed the colour scheme of the comics with inexplicable bare arms and midriff. The mini seems to be modelled vaguely with the option of bare arms, but like Knight Modles I ignored that in painting.

The casting, unfortunately like all of this crew box except William Cobb, was pretty rough in places. I have had some excellent Knight Models casts, but in all honesty too many have been of a sub-standard quality given their price point. I continue to collect the range purely because of the IP; playing games is a welcome bonus and a motivation to paint for me. 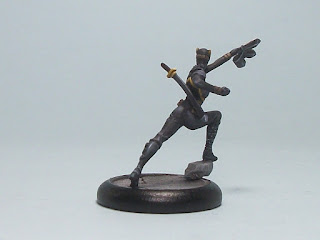 I have been doing some analysis and despite appearances, Butcher is not the crew's heavy-hitter: the most dangerous model is arguably Strix, followed by Brandon O'Malley and William Cobb. This makes Strix a 'must have' in the crew. This is a simple artefact of how rules that affect hitting and damaging targets have been designed in BMG. Therefore, I need to work out how to get the most out of Strix since her attacks can be blocked 50% of the time, meaning it is possible to get her bogged down against the wrong type of target.

In the next week I hope to finish William Cobb which will take me to a 300 Rep crew, and will leave me one or two minis from my tournament crew.