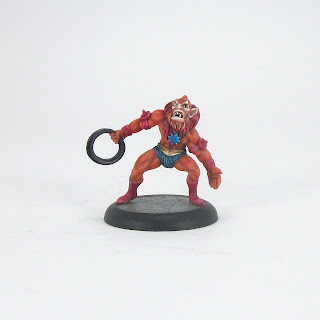 Beast Man joins the ranks of Skeletor's Evil Warriors as my Masters of the Universe Project makes slow but fairly steady progress, and means I have painted two minis for He-Month so far. With two Evil Warriors now finished, I think Orko is due for some reinforcements soon!

In-keeping with many Masters of the Universe characters, Beast Man has a typically bonkers colour scheme, including an orange-blue discord and red side by side with orange - if, for example, I was painting a random generic superhero or space-farer mini they are not colour combinations I would consider! 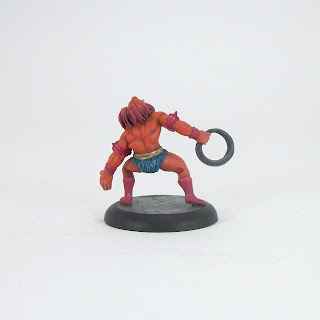 I have tried to remain fairly faithful to colour scheme depicted in the 1980's Masters of the Universe cartoon as that is clearly the primary design inspiration for the sculpt (available from Qminis' Etsy store - click for link), although I tried to differentiate the two types areas of red a little (torso piece in contrast to the boots and arm bands), and the two areas of blue (fur trunks and the amulet thing-y).

While not my best painting, I did enjoy being able to finish the mini in an afternoon, and overall I am pleased with how it turned out. 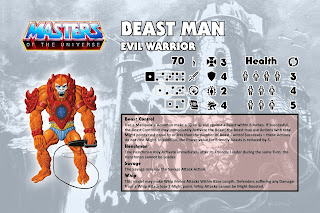 The bottom image is Beast Man's game card for the personal set of Masters of the Universe skirmish rules. The first draft is complete and I hope to get some games in with the rules in the next few weeks.
Posted by pulpcitizen at 10:34