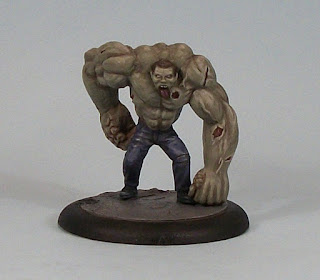 The final Zed - another Big Boss  Zombie, and another ugly one!

This could have been finished at the weekend, except for my sojourn with Rob to some VBCW gaming in Evesham (read about here on Rob's blog).

So the last bits and bobs of painting were completed over the past two nights.

In all I hit the minimum target which is pleasing. Considering I had painted so little in the last few months I suppose I should be satisfied with doing even just 5 minis.

This Boss Zombie is from the same pack as the last one and is by Studio Miniatures. Base as usual is by Fenris Games to tie my horde together. 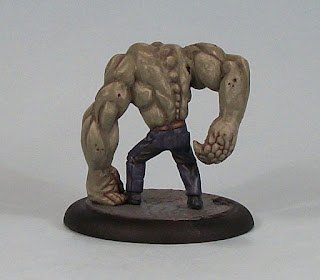 A nasty looking piece of work this one, I wanted the 'cracked skin' on the hands to have the hint of red-raw muscle underneath.

So Zomtober ends, and my horde (ha-ha - a genrous definition if ever there was one) has grown by 5. Well done to all who participated. There will be next year I reckon...
Posted by pulpcitizen at 13:46