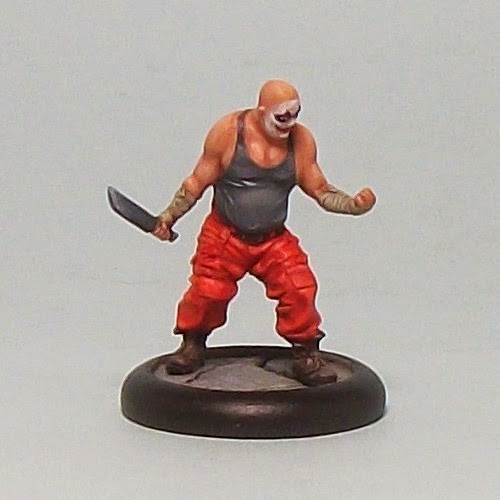 This Clown Henchman with Knife represents another BMG mini down, but this Joker Henchman is not the start of my next crew, instead he was started simply as some of the colours used matched my Blackgate Prisoners.

With the face I tried to go for an effect of carelessly applied greasepaint. I am happy with the white base, less so the dark eye make-up.

Like I said above, I am not doing a Joker crew next. Instead, I am planning on a Black Mask crew with a few supplements from what if have fully or partly painted: Riddler; Deadshot; Turk; and Prisoner with Tube.

I have had recent discussions about the game with buddies, and I think I have identified my biggest problem with it; that is that there is such disparity it seems between swarms and low model-count 'elite' crews. The latter suffer as they simply cannot contest enough Objectives without Henchmen. That leads me to wonder if the game would not be more satisfactory if the number of Objectives per player was scaled to game size. Something along the lines of 1 Objective per player per full 150 Reputation would give the elite crews a fairer chance I think, but so far that is purely an intellectual exercise and not yet gamed out or tested. 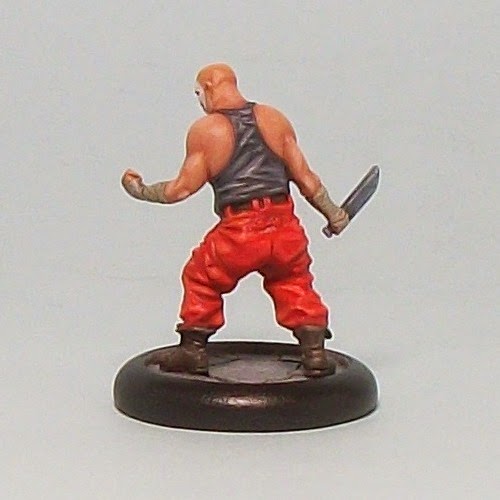 I am awaiting an order of bases before I can assemble my next batches of BMG minis; they were ordered a few weeks ago and will hopefully arrive in the next two to three weeks. I have now met my 2015 target for painting BMG minis, but I expect to exceed that. I have Black Mask and a Henchman ready to be under-coated, so hopefully, I will make some progress soon on those.

BMG Painting Summary
BMG characters owned: 83 (added 17 more models since the last one was finished - I was able advantage of some good timing for eBay auctions...)
Percentage of owned characters painted: 13.3% (11 models)
Posted by pulpcitizen at 00:55