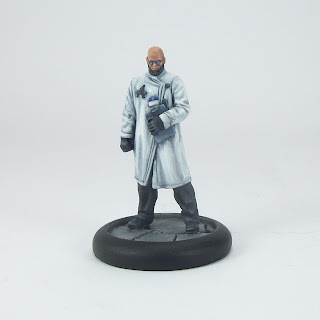 Another BMG mini done, following renewed motivation spurred by finishing Prisoner 05 and Joker, although Hugo Strange proved somewhat infuriating in the painting! The pale greys I was mixing up as the base layers to the 'white' looked fine until painting on the 'white' which made them look too dark. I stepped away from my usual choice and now realise that was a mistake!

While Prisoner 05 and Joker were cases of finishing part-painted stuff, Hugo Strange was done from scratch over a couple of days - he just took longer than planned due to the 'white' and then dropping him at one point (clumsy me!). I hope to finish off another couple of part-painted BMG minis very soon. 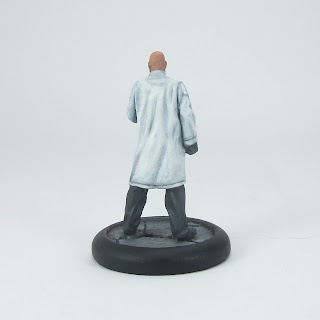 With so many BMG minis still to paint I am not entertaining thoughts of repainting Hugo Strange, so I accept him as he is. Even though I have been a fan of the character since a memorable story back in the 1980's, to be honest he is not likely to make it to my gaming table any time soon, if at all. The main reason being that I just don't see a place for him in any of my more likely crews since his rules push him to be surrounded by Arkham Asylum Inmates and Free Agents with 'Mental Disorder' rules. He offers buffs for relevant models, but at a cost of being the cost equivalent to a couple of Henchmen and not being able to take Catwoman - including her Arkham City VP generator version. For me he simply does not offer enough value in what he does, especially as many of my games are in tournaments where I feel he would be lacking. Mileage may vary though.