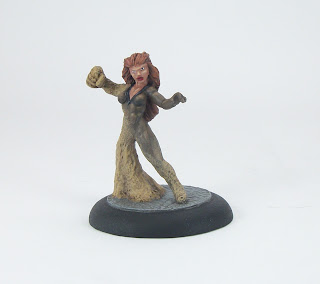 Sandblaster is a mini I assembled and undercoated years ago. Her undercoat was black, which I reckon puts it at least as six or seven years ago, maybe more. In other words - long overdue to get out of the dread 'painting queue'!

The mini is produced by Reaper in their Chronoscope range, and to be honest, the detail is somewhat soft. That said, she made for a fairly straightforward paint job, even if a pretty basic one, which was ideal after the barren painting spell of February and March. 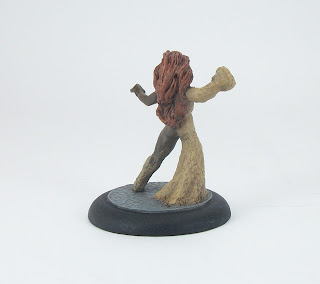 I'll be using the mini as Sandblaster, a Super in the ranks of the Crimemasters, a Team I'll use to play-test Supers Unlimited (you can read more about Supers Unlimited in general on the Kitbash Games blog). A crook who never made the big time, Jenna Thomas was part of a gang who stole a sample of sand energised with extra-terrestrial energy. The sand was affected following the appearance of Ion, the Caller and his subsequent battle with The Watch near Groom Lake. The sample was being held and tested at OMNI Labs under government contract. With inside help, the gang secured a flask of the sand for their buyer, but as they tried to escape, an OMNI security guard's energy pistol blast shattered the flask and reacted with the contents, spraying them across Jenna's body. She awoke days later, handcuffed to a hospital bed in an isolation unit. Thinking only of escape, her body turned to a crystalline form and as living sand she slipped her bonds, escaping into the night. Months later, the Villain known as Sandblaster started her Super-crime career.
Posted by pulpcitizen at 00:01