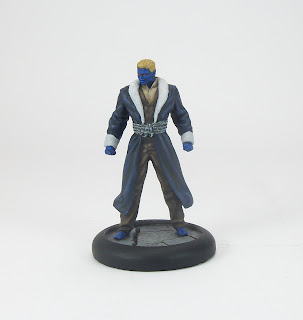 In painting Emperor Penguin, I have now finished six BMG minis in just under two weeks, putting me well on target for the annual target I set for the range, as well as helping me get back on track with my painting overall. I am pretty happy with the results as I set out to paint up a mini in a day (well, an afternoon in reality); I am not planning a Penguin crew any time soon - no, I chose the mini as I thought I had a good chance of starting and finishing it in a single day. That said, I quite like what I see in game terms...

Emperor Penguin (also known as Emperor Blackgate in the comics) is a fairly recent addition to the batman rogues gallery. He starts off as a number-two to the Penguin himself, then sets his boss up in order to take control of his crime operation. Soon after he took a combination of Bat-verse serums (venom - Bane's stuff and Man-bat serum) with some help from Poison Ivy to become superhumanly powerful - as you do - and later takes the name Emperor Blackgate following his incarceration. 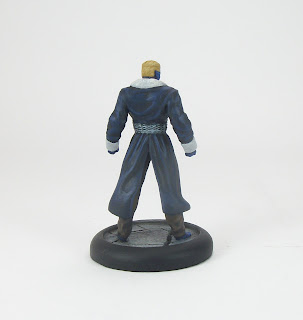 Which brings me onto his game rules, and I have to say, I like what I see. As far as Leaders go, Emperor Penguin offers very good durability with Defense 4, Endurance 9, Tough Skin and Regeneration. This makes the fact that he is geared up for close combat a much more palatable option, and makes him a less vulnerable option than Penguin, but at higher Rep cost and at the loss of some Funding.