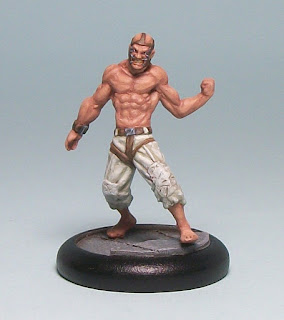 File No. 08923 is my 25th painted mini for BMG, so a small milestone of sorts. I guess he is an enemy from one of the Arkham video game series, but cannot confirm that as I don't play the games. After finishing Ozymandias, I wasn't sure I would paint another BMG mini in July, but this one just seemed to progress over a few days.

The painting started off one way, before I had a change of mind about the clothes/fabric colours and had to over-paint what I had done there. It wasn't until I had started that I saw I was not going to be satisfied with the colour choice I had made hence that change.

I don't think it is a great sculpt because of how some of the musculature has been rendered. I am not a sculptor so I acknowledge I don't have the skill to create anything like this, but I think as a hobbyist i can comment on what I see and I do think it has flaws. Worse still was the casting which had quite a rough feel on some parts of the 'skin' areas. There was also a challenging mould line that was prominent across the head where detail was shallow and which I was  not entirely able to remove due to the details being so fine. 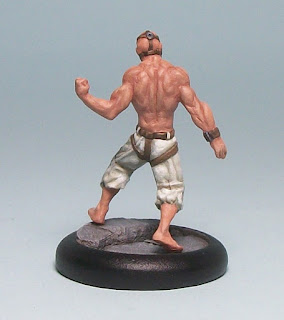 In BMG, File No. 08923 is a Henchmen that is part of the Arkham Lunatics pack with Zsasz that can be used by pretty much all the bad guy crews except where they have their own restrictions (like Court of Owls currently do due to their only Leader choice). It is a character I do not envisage me using unless its rules get over-hauled. It is ham-strung by 2 rules: one which prevents all Recovery rolls, meaning its decent Endurance value does not go very far; and another which heavily limits how it moves, and forcing attacks against models in base to base regardless of whether friendly or enemy. Basically for 20 Reputation I see much better options available.

BMG Painting Summary
BMG characters owned: 132 (added: nothing, but I have a big order on its way in a week or so)
Percentage of owned characters painted: 18.9% (25 models)
Posted by pulpcitizen at 11:08