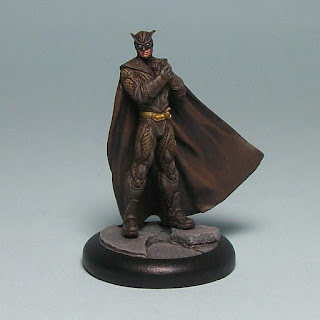 My second Watchmen mini, and like Rorschach, Nite Owl was painted quickly by my standards, in around 2-3 hours over a few short sessions. I had some sudden impetus last weekend after finishing Scarecrow and Mule Goon and decided to take advantage of it!

Of course at the current rate of painting, it will be 3 more years before my Watchmen crew is actually finished.... :)

The palette is very muted and limited, with primarily 3 variations of brown, and I tried to echo the movie incarnation to an extent, within my own limitations as a painter! In all it is not perfect but it will do for me, and it is pleasing to have painted a few minis already in July after paltry output in March and April, and it has also put me way ahead of my 2015 target for painting BMG minis.

While I think it could be quite a while before I have a playable Watchmen crew, the characters look quite interesting and varied in rules terms, although I suspect each will have unique learning curves, and that the two least powerful fighters (Nite Owl and Silk Spectre based on Damage output) will require the most learning. 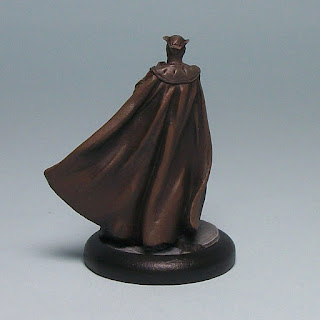 One gripe to note - for some reason my casting does not have the scale armour on the outer left thigh, which I think is either down to the sculptor forgetting to do so or Knight Model's casting - either way a crass quality control error for a mini with a premium price point. I would welcome comment from anyone else with the mini if theirs has/had the same issue.

Moving forward for BMG, I do want to get Mesh painted, and maybe Hush too, for my Black Mask and Poison Ivy crews respectively. After that I may rest my BMG painting to concentrate on other stuff, but time will tell!