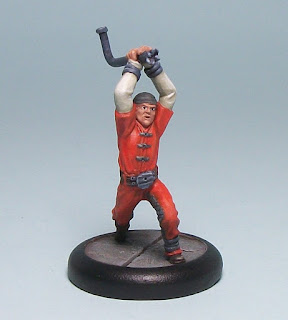 My BMG productivity continues, although truth be told I started painting this mini quite a while ago, either at the same time as the Clown, or more likely even earlier when I started Turk. In other words, it has taken quite a while to get finished from first base-coats. That is often how I paint, starting things and losing momentum.

Games and gaming serve as a useful spur to painting for me at times, and finishing this was with a game in mind, and of wanting to try out a new crew line-up. As one of the cheapest models in terms of Reputation in the game, Prisoner 01 was the ideal final addition I needed, and has pushed my total of BMG minis on further. 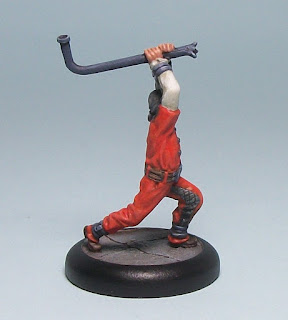 All that said, the final painting result is definitely a bit on the scrappy side, but I have no enthusiasm to try and make it look better, so I can live with how he has turned out. I am most glad that he is now out of the dread 'paint queue' as he had been hanging around as I said above. It doesn't help that as before, my highlights are washed out when photographing the mini.

Individually the model is fairly weak in game terms, as his Tube weapon is not too threatening (basically the same as Goon 2's Baseball Bat, but Prisoner 01 is cheaper in Reputation terms) but I expect him to back up a heavier-hitting ally or two, or just grab Loot and smuggle it away. He doesn't offer much threat alone, but when ganging up with another model, especially if Activating first, he can enhance the ally's chance to hit in close combat. Basically he is going to be included because he is cheap - where I cannot afford the reputation for a more expensive Henchman. I am planning to try a few different crew line-ups in the next month or two, and Prisoner 01 will give me a little leeway to include more expensive Henchmen or Free Agents. 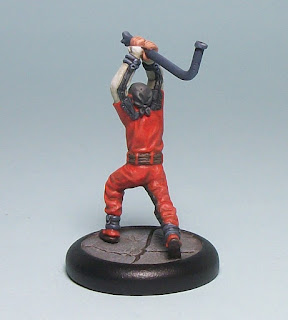 I am now at a point where I have one more part-painted BMG mini which I would like to finish soon, and maybe paint another Free Agent (Hush as I like the idea of including him in a Poison Ivy crew), before focusing on other ranges a lot more. So after those, if they get done soon, I don't expect too much more BMG painting from me this year, but you never know, especially as my losing/drawing streak continues and I am still striving to find a satisfactory combo of minis for my crew.