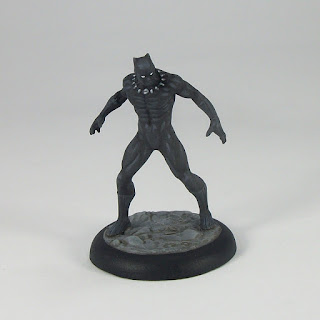 I have been bitten by the bug of a new side project in recent days, and as any hobbyist knows, that way lies peril as there is never enough time for every project!

I like designing character rules and I like playing games. I also like what Knight Models did to a limited extent with SMG, but lament there wasn't more. The now defunct SMG range extends to 15 officially released minis with cards, plus 2 minis with leaked cards which were never printed (Elektra and Venom).

I started musing and pondering this week, which is what general leads me down the rabbit-hole of a new project, and may be regarded as 'unwise' by the more learned hobbyist....

My idea is simple: create more stuff which I can use for SMG assuming my main opponent agrees to it being used! But any good project needs some boundaries, so I am following these rules: 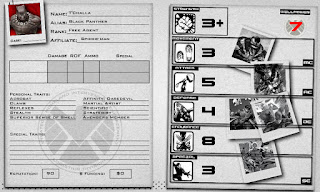 Now, I already have given myself a slight head-start in the SMG Project, as I have painted Black Panther (shown on the blog last July) and Black Widow already. I set to work adapting a cost schema I obtained from a fellow hobbyist and engineered it so it gave me ball-park near costings on Daredevil and Elektra, using that to inform the costs I assign to new characters as I develop them.

One of the first examples is the Black Panther card in this post. I tried to encapsulate a classic sense of Black Panther (so omitted the Lord of the Dead stuff). T'Challa has a storied history operating solo in and around New York, and stood in for Daredevil for a while. In the same way that BMG stretches Affiliations (think Cyborg to Batman), I felt his natural home was Spider-man's faction. Expect to see more in my SMG Project in coming months!