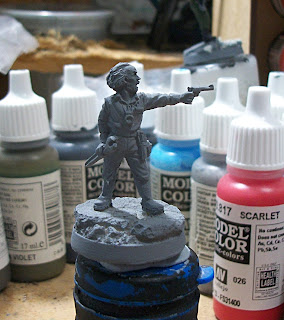 I don't often do WiP posts, but as I have hit a painting slowdown this month (so far in August I painted 6 DUST Quonset Huts glimpsed in the last post, but haven't finished any character models yet), I thought I might do so at this time to help gee me up!

This mini will become Hotwire, a recent addition to the Cobra forces in the G.I. Joe mythos. Basically he seems to be a deranged engineer-scientist specialising in modification of BATs (Battle Android Troopers). 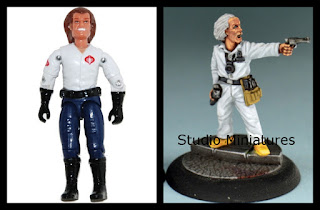 One of the things driving decisions for Brummie and me in our choice of characters to add to our G.I. Joe Projects is the availability of source minis. Hotwire is a case in point - while we were scouting options, I checked out Studio Miniatures' Survivors range and picked out two good possibilities. One of those options led to Hotwire, who started off as a not-Doc Brown type (Back to the Future). It is not a character I would have even considered except for the relative ease of conversion I saw in the source mini.

I set to work on his lower trouser legs and arm cuffs with a file, to turn the areas into boots and gloves respectively, and added a bit of green stuff for a trouser near a boot top. I also added a layer of thin plastic under his shoes to make him a tiny bit taller to fit the other minis and bulk out his boots. I am reasonably pleased with how that bit of work turned out and hope he paints up well enough that he looks 'right' and the work seems correct. I have a few days off so I plan to finish several minis this week, including Hotwire, motivation permitting!
Posted by pulpcitizen at 05:57