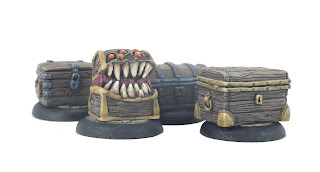 It feels good to get something finished, even simple stuff like these Treasure Chest Markers and another Mimic. They were started in December to try and get myself out of the rut that marked much of my 2018 hobby output, but they never got finished in that month as planned, so with a bit of time spare i decided to crack on with them.

I finished the metal-work on the last Treasure Chest this week which meant I could finally finish the basing on all of them collectively and get them cleared from my backlog.

The Mimic is from a Krakon Games Kickstarter (not sure if is on their store yet), and is my second Mimic (after this one from Reaper Bones).

I intend to eventually use it with my other Mimic and the Treasure Chest Markers in either some 28 mm dungeon-based Fantasy Gaming or Chibi Fantasy gaming.
Posted by pulpcitizen at 11:21