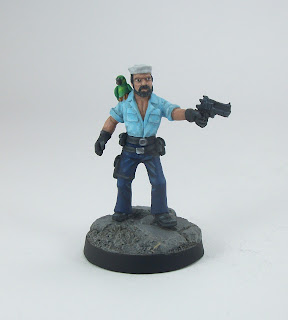 'In the navy, come on people and make a stand' - ah, Shipwreck is my latest G.I. Joe Project addition, and with his naval attire he will stand out a mile among the mainly greens and browns for many of the G.I. Joe team uniforms!

Shipwreck is a tough petty officer who calmly faces any situation, not easily rattled. Surprisingly, or maybe not so surprisingly, there were a fair few naval personnel in the G.I. Joe ranks.

The mini is from a private commission which I was thankful to get hold of. I decided to swap the pistol weapon he had for something heavier looking to give a little more 'grounded' look - the irony of that choice is not lost on me given he walks into battle with a parrot on his shoulder! The painting was nice and straightforward, and once I had blocked in the main two blue colours and flesh, I started working from the waist down before tackling the remaining bits. 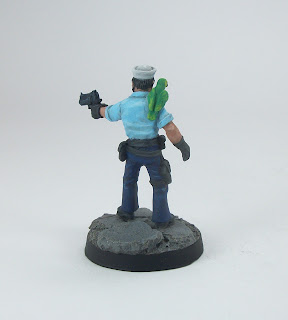 One of the most fun things for me in this project so far has been creating the rules cards for the minis; basically distilling how the characters are described in their file cards and the Marvel comics into a set of rules that feels right. Suffice it to say a lot of cards are done and a lot of conversions bubbling into mind.