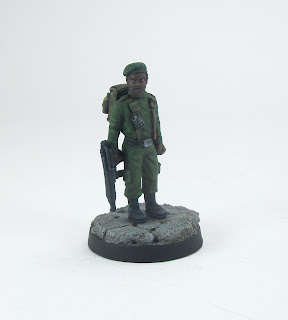 Stalker is my sixth member of the G.I. Joe team finished, and my eighth G.I. Joe Project mini in all. He is a character I like a lot in the comics, probably because he was in the first G.I. Joe story I read (which was a reprint of the American stuff).

Although the pictures have washed out most of my highlighting on Stalker, I am reasonably happy with how he turned out. I decided against painting a camo stripe pattern as the base green colour is quite dark, and I opted for a fairly light contrast with his webbing and backpack. I started Stalker before Jinx, but finished the latter first which is pretty typical for me. 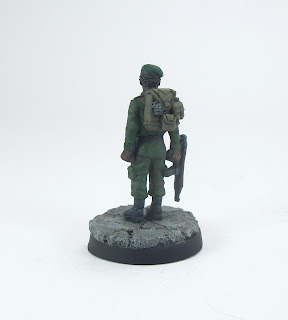 I have a few other members of the G.I. Joe team underway, and I hope to finish at least two or three more before the end of the month; Brummie and I have provisionally set early August for our first Squad Wars play-test. I have being prepping lots of materials for the opening games and I am looking forward to seeing if things work as I want them to.